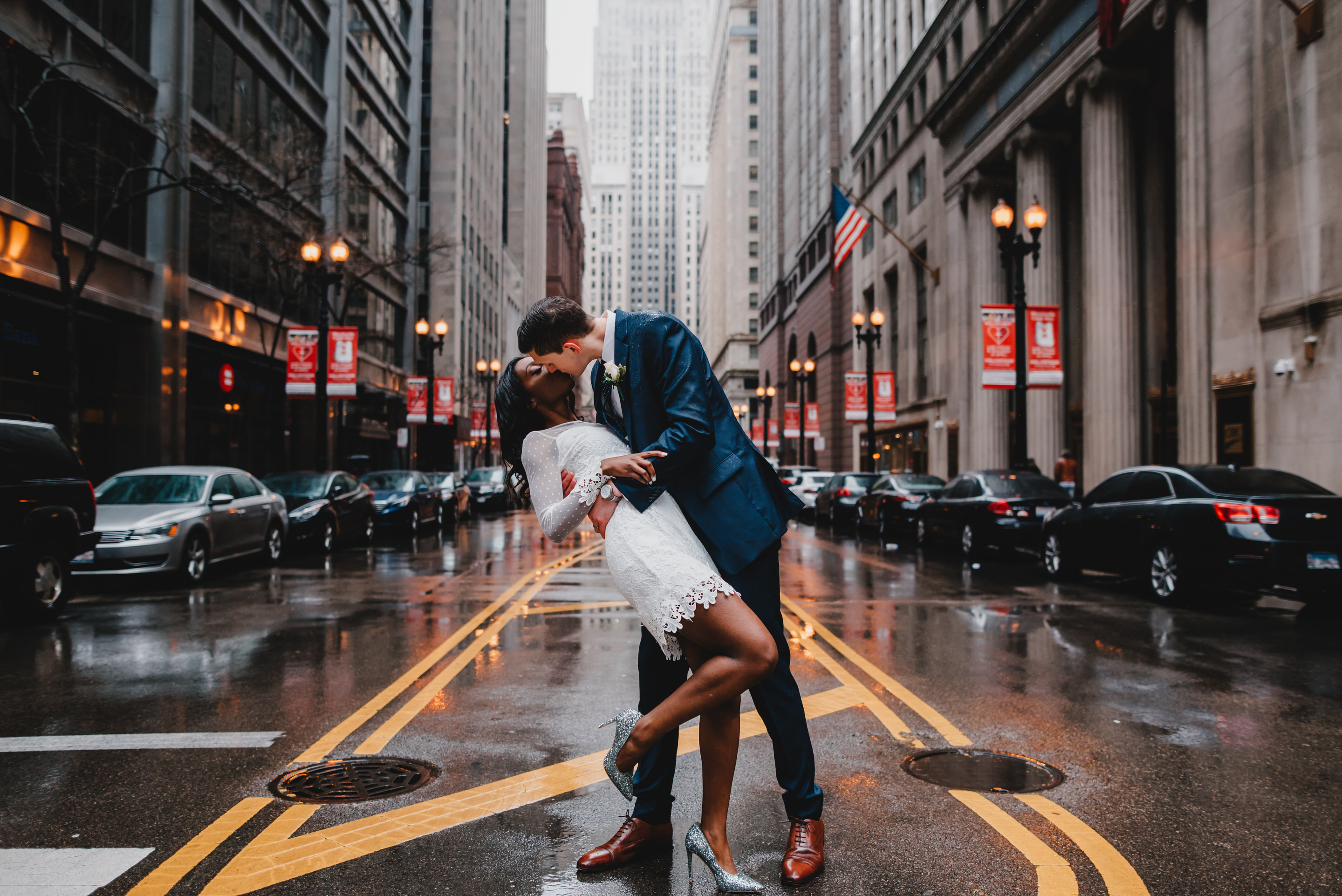 When you are getting married at the end of April, you’re probably hoping for some nice sunny spring day. But for Olivia and Steven, they had a nice April winter Chicago city hall wedding instead. It was so funny because, the night before, Olivia had been messaging us a little stressed about the rain and snow that was supposed to come, and Pavel couldn’t help but just smile and reassure her, “We’re going to create awesome stuff despite and with the weather :)”. And they did, because though the weather was cold, Olivia and Steven braved the gloom with their awesome model-y selves and absolutely killed it 🙂

And so back to our story. Alas, morning came and it was very gloomy in the downtown of Chicago, with both rain and snow falling on us at the same time. But, that didn’t stop nor shorten the line at City hall–it was completely out the door–SO many people were undeterred from getting married on this gorgeous gloomy day!! And for Olivia and Steven, no matter the snow and humongous line–they remained focused on their one goal: to get hitched. And to create awesome pictures haha. Which is our most favorite type of couple to create photos with 😀

And we looove city hall weddings (here is another one)! Maybe it’s because we also got (secretly) married there, but probably moreso because it is so close and intimate. Many times it’s just the bride and groom, some times a few of their closest, dearest ones. And we’re able to just soak in the atmosphere of the day without all the programs and craziness of a typical big wedding (which, don’t get us wrong, we LOVE as well haha. We just love weddings in general and very much appreciate both the quiet intimacy of an elopement and the crazy, joyful party of a traditional wedding!).

After the ceremony (which took maybe two minutes), we went a couple blocks away to take photos in front of the Board of Trade building. You may know that location from a pretty epic scene form the Dark Knight, but we are pretty sure that our photos will have the complete opposite effect and not bring you so much stress so it’s all good 😀

After taking photos for some time, we were freezing, so we decided to go inside the Chicago Cultural Center, which is just an incredibly beautiful building with lots of amazing architecture. But mainly it was warm and dry 😛 And lastly, what would a Chicago downtown wedding be without a photo in front of the Chicago Theatre Sign? 😉 The celebratory mood of the day was encouraged by all the drivers who were passing from both sides of us and it made for perfect photos.

Must I try to come up with a witty caption? I must

Simply based on the first two photos, I’d say th